So what is it like to be an English speaker
in the Chor Audite Nova? 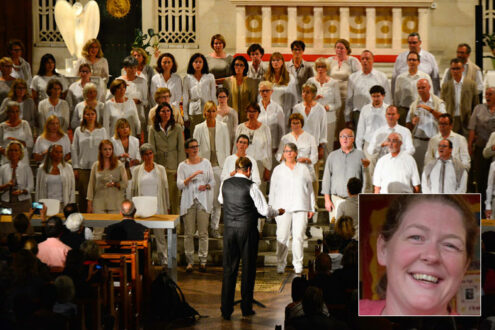 I started singing with Chor Audite Nova in September 2016. I had just moved into the area and wanted to find a choir and so after a consultation with our trusty friend, Google, I walked in to a rehearsal one Monday evening, where I was warmly welcomed.  After several ‘Schnupperprobe’ and an audition, my membership of this lovely choir community began.

So what is it like to be an English speaker in this choir?  Yes, our conductor, Johannes, leads the rehearsals in High German, but it doesn’t take long to learn the word for “bar” and “beginning” and “repeat” and “that was (not) good” and it certainly doesn’t take long to understand that the facial expressions of a frustrated conductor are the same in any language!

Just, however, as you feel that you are getting to grips with all these German musical terms, then a member of the choir committee will pop up during the interval with a message about something very important such as the colour of what we must wear at the next concert.  And this will, of course, be delivered at top speed in yet another language, Swiss German! It is then time to remain calm and to ask your friendly neighbour some pertinent questions to ascertain whether there is any risk of you turning up at the concert hall in yellow polka dots when everyone else will be in black!

And now you think you have done it – after several months, you know just enough High German and Swiss German to ensure that you are on the right page and dressed in the right kind of clothes, when the conductor will produce a new piece of music in Italian, followed by another in Romantsch or perhaps even Catalan!

All jesting aside, I cannot recommend membership of this choir highly enough.  Monday comes around and we start our working week and at some point during the day, most people can admit to wishing that they could go home that evening and put their feet up, instead of attending rehearsal. But I have never regretted the times when I have felt most tired and stressed, and have made the effort to go. We can escape from our normal world into another world of people who are just there to sing together and who cares what the conductor is saying…the music we make is a language of its own which we all speak.