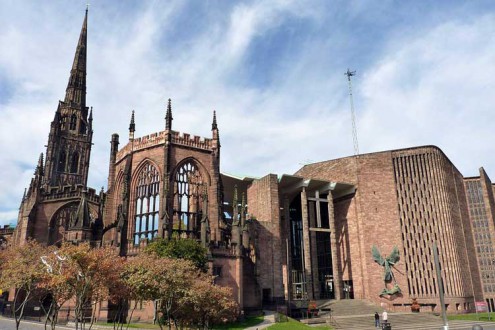 As part of the Benjamin Britten centenary celebrations in 2013, the War Requiem was performed on April 24th, 25th and 26th at the Tonhalle Zürich.  First performed on May 30th, 1962, this work was commissioned to mark the consecration of the new Coventry Cathedral (illustration).  In Zürich the soprano Tatiana Pavloskaya, the tenor Toby Spence, the baritone Hanno Müller-Brachmann and the Tonhalle Orchestra together with the Zürich Singing Academy and the Zürich Boys’ Choir were conducted by Charles Dutoit.  The Zürich Singing Academy consists of 60 professional singers, and for this occasion they augmented the choir by inviting the participation of 40 amateur singers from throughout Switzerland.  Three members of the Audite Nova Choir responded to this invitation.  No-one – whether in the audience or on stage – was left unmoved by these performances.  One of the Audite Nova participants recounts this experience.

Personal impressions of the War Requiem performances in Zürich

Benjamin Britten’s music can be remarkably haunting.  Even months later, I am still moved by spontaneous recollections of the April performances.  I first got to know the War Requiem from the 1963 Britten recording and, by coincidence, heard it performed by the Audite Nova Choir under Willi Gohl’s direction at St. Michael’s Church in Zug.  I could not resist the opportunity to actually sing in this wonderful, touching work.

It was indeed a challenge.  The excerpts for the auditions included the fugal recapitulation of the “Dies irae” from the “Libera Me” movement, with its alternating 2/2 & 3/4 rhythms.  Would we ever manage to sing it at anywhere near full allegro?  Happily, recent Audite Nova projects, including the Rütti Requiem, had provided us with invaluable experience.  And, in the course of two intensive rehearsal weekends for the amateur singers and one for the full choir, these tricky passages did indeed magically fall into place.

During these rehearsals Tim Brown trained us to colour our sound for its effect on the audience, even when it sometimes seemed strange to us: rolled r’s, aggressively bright vowels, precisely placed t’s and s’s.  Did this emphasis on text seem familiar?

What impressions remain of the concerts?  The work has a surreal quality, inhabiting three separate levels: the grand ritual of the Latin Mass for the Dead, the personal experiences of front-line soldiers so movingly expressed in Wilfred Owen’s poetry, and finally the nostalgic innocence of the distant boys’ choir.  In the main choir we could feel the piety of the opening, the drama of the “Dies Irae” with its martial fanfares, the pathos of the “Lachrymosa” and the tenderness of the “Benedictus”, all tellingly – sometimes ironically –  interwoven with Owen’s poems.  Only after the catharsis of the orchestral climax in “Libera Me” and the repose following the soldiers’ “Strange Meeting” did the three disparate groups merge in the exquisitely ethereal reconciliation of “In Paradisum”.  Albeit demanding, with the choir’s 8 part canon set against the boys’ chorus and the soldiers’ duet, “Let us sleep now…”, this was for me the most touching moment in the whole work.

Yet even these hauntingly beautiful closing bars were punctuated by the bells tolling the enigmatic C-F# discord that sounds repeatedly throughout the work – perhaps symbolic of the irreconcilable contradiction between mankind’s yearning for peace and his undiminished readiness to make war.  Indeed, the War Requiem truly reflects Wilfred Owen’s words quoted in the title page of the score: “My subject is War, and the pity of War.  The Poetry is in the pity… All a poet can do today is warn.”

Photograph of Coventry Cathedral by Cmglee at en.wikipedia, CC3.0