“The armed man” at the Festival Grec de Barcelona 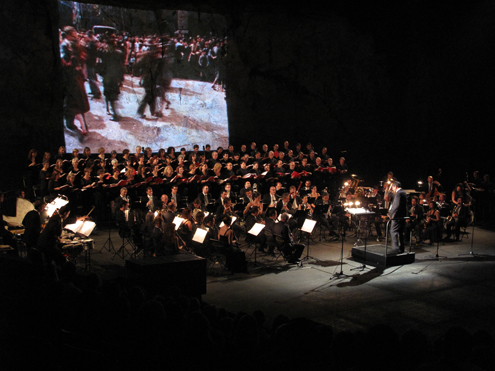 During July and August, when many seek to escape the scorching heat of the city for more temperate regions, the City of Barcelona holds the Festval Grec de Barcelona year after year for those who remain at home.  The cultural festival takes its name from its main venue, the Teatre Grec, an open-air theatre on Barcelona’s landmark hill, Montjuïc.  The Teatre Grec, built in the style of an ancient amphitheatre for the 1929 Barcelona International Exhibition, provides a unique and impressive experience for audience and participants alike.  The open-air performances begin after the onset of darkness, creating a magical atmosphere as the heat of the day yields to the cool of the summer evening.

In contrast to last year’s performances, this year’s concert came closer to the essential theme of the work – the armed man as a figure of fear – by including the original video projections from the first performance in 2000 in London.  Deeply affected by scenes from all the armed conflicts of the twentieth century combined with the urgency of Jenkins’ music, the audience, which warmly applauded in the beginning, quickly fell silent.  This pensive atmosphere was only dispelled by the concluding number, “Better is Peace”, with its message of reconciliation and hope.  After the last notes had died away under the night sky, the audience responded with an enthusiastic ovation for the orchestra, chorus and soloists, who in their turn acknowledged the enduring applause with an encore from “Better is Peace”