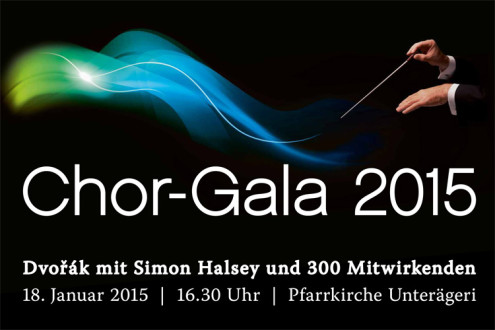 Simon Halsey is in demand throughout the world as a guest conductor and lecturer.  Sir Simon Rattle, the principal conductor of the Berlin Philharmonic Orchestra (Berliner Philharmoniker) describes him as one of the greatest choral conductors of the day – and of all time.  Halsey is the principal conductor of the Berlin Radio Choir (Rundfunkchor Berlin), the City of Birmingham Symphony Chorus as well as – since 2012 – the London Symphony Chorus.  In addition, he is committed to fostering the musical development of young people, most recently as artistic director of the youth choir programme of the Berlin Philharmonic.  Insight into his approach and working methods can be found in the Berlin Radio Choir webpage “Sing-along concert”.

From January 16 to 18, 2015 Simon Halsey will direct the choral weekend hosted by the Swiss Federation Europa Cantat (SFEC) and organized by the Audite Nova Choir of Zug.  The weekend offers a master class for choral conductors as well as a choral workshop preparing the Mass in D major, Opus 86 for choir and organ by Antonin Dvořák.

The master class is aimed at conductors from all over Switzerland as well as students specializing in choral conducting.  Six applicants will be chosen for active participation, but all those interested may attend in a passive capacity.  Auditions for the master class will be held on Friday, January 16, 2015 from 11:00 h in the main hall of the Unterägeri Music School.  The master class itself will begin on the same day at 19:30 h in the same venue.

Members of choirs – both those within and outside the SFEC organization – are invited to participate in the Choral workshop.  Participation is open to those who either have already sung the Dvořák Mass or can prepare their parts independently.  The workshop begins on Saturday, January 17 at 10:00 h in the concert hall of the Ägerihalle and concludes with the closing concert on Sunday, January 18, 2015 at 16:30 h in the Pfarrkirche Unterägeri.

The Leonardo Ensemble (Ensemble Leonardo) founded by Nicolas Fink will serve as the workshop choir in the weekend programme.  It has made a name for itself with, among other things, its sing-along concerts throughout Switzerland, and, in 2012, it gave the premiere performance of Carl Rütti’s Ave Generosa.  Nicolas Fink will be assisting Simon Halsey throughout the weekend programme.  In addition, the Fribourg conductor Gonzague Monney will also be assisting with voice-part rehearsals.

The first part of the closing concert, entitled Choral Gala, will consist of a cappella choral music performed by the Leonardo Ensemble directed by Nicolas Fink and the Audite Nova Choir of Zug directed by Johannes Meister.  The second part will consist of the Dvořák Mass prepared in the choral workshop, in which the choir will be accompanied on the organ by the renowned Zug composer and organist, Carl Rütti.