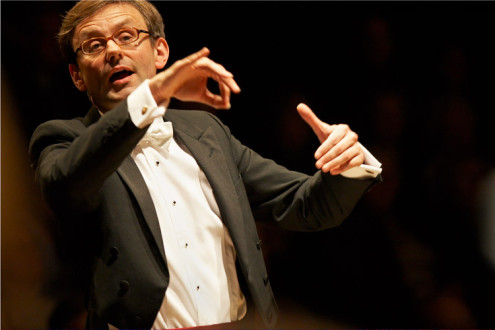 The Swiss Federation Europa Cantat (SFEC) is the association linking the best amateur choirs in the country.  It serves to promote exchange among myriad cultures and, in particular, to support work with youth choirs.  An annual event is the choir weekend for choral singers, in which choral conductors can gain valuable training and experience in top-class workshops.  The high point of these weekends is always the final concert.

From January 16th to 18th, 2015 Zug will be the host canton and Unterägeri the venue for this national weekend workshop and ensuing concert.  The world-renowned conductor Simon Halsey will hold a master class for choral conductors as well as rehearsing and directing the final concert, involving singers from SFEC choirs throughout Switzerland.

Simon Halsey (www.rundfunkchor-berlin.de) is a friend and associate of Sir Simon Rattle, the principal conductor of the Berlin Philharmonic (Berliner Philharmoniker), for whom, in a famous partnership, he has rehearsed the Berlin Radio Choir in the repertoire for orchestra and chorus.  “Nomen est omen”: their namesake Simon Peter was known as the fisher of men.  These two virtuosi ignite just this sort of enthusiasm in the world of music.  This is true both of Rattle and his way with the “free republic” of the Berlin Philharmonic and Halsey, who understands as no other how to unfold the full potential of all the singers in a choir.  The public will be able to experience his exhilarating style in the final concert, the Mass in D major by Antonin Dvorak, which will be performed with around 300 voices in the Kirche Unterägeri, accompanied on the organ by the renowned Zug composer and organist, Carl Rütti.

In the coming months, the Organizing Committee for this project – made up of members of the Audite Nova Choir – will provide further details regarding the programme, Simon Halsey and the other participating artists, as well as about the broadening effect of choral singing on heart and mind.  If you already have questions about this event, we invite you to get in touch with us via the contact form on our homepage (link to Contact Form).  We would be pleased to hear from you.