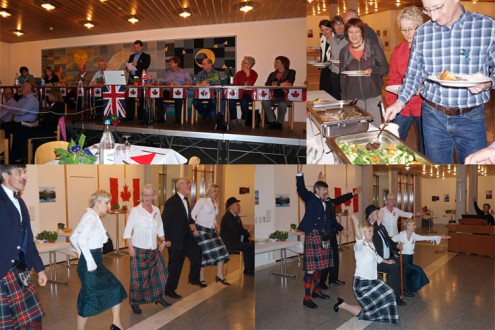 “The Audite Nova Choir of Zug (Chor Audite Nova Zug) is one of the most eminent choirs in Central Switzerland” – these are the words with which the choir introduces itself on its website profile.  However, anyone supposing that all the members do indeed originate from Central Switzerland will be far from the mark.  Currently the choir has around a hundred active members, and of these, twenty – a good 20% – originally came from outside Switzerland.  Although most have come here from German- or English-speaking countries, many new arrivals come from other countries such as the Netherlands, Luxembourg or Slovakia.

What does it mean to sing in a choir in a new country, often in a new language? A new member, who recently arrived from Canada, expressed the view, “Music is the language that unites us all. Singing in a choir gives me the chance to become part of the new culture, because I already know the language of music.”

This statement sums up the key point: music allows communication beyond the boundaries of spoken language.  As singers we must frequently take on the challenge of choral literature in other languages.  Here too, the diverse backgrounds of our members prove to be an invaluable and often entertaining resource, when, for instance, the choir is provided with an impromptu explanation of Hebrew text passages or with a demonstration of the correct accenting of Old-English song texts.

The Audite Nova choir is a prime example of social integration.  The choir provides members from outside Switzerland with an ideal opportunity to take part in the cultural and social life of their new home.  At the same time, the choir as a whole benefits from the varied cultural backgrounds of its members.  Indeed, the most recent annual general meeting was organized with great enthusiasm by the English-speaking singers, and the choir members were treated to Scottish country dancing, traditional English cuisine and entertainment from American musicals.

“Heimat ist dort, wo wir Bedeutungswelten miteinander teilen“, to quote the Zürich ethnologist, Mario Erdheim: home is where we share subjective worlds of meaning with one another.  In the Audite Nova Choir it is the shared love of music which binds us, and provides us with a sense of belonging, wherever we might come from.